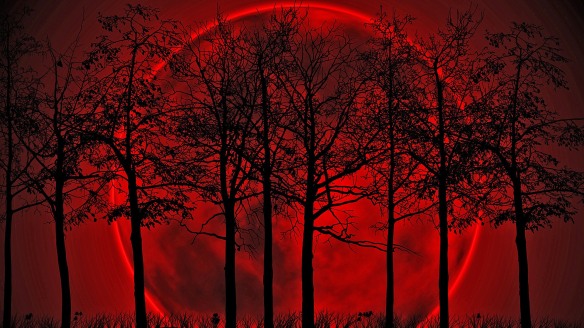 The last time I hunted the Blood Moon I lost consciousness. Not my fault; it was scheduled for three in the morning. YOU try to stay awake after hiking and road tripping all day to find the perfect viewing spot.

This year I had to make it good. Not only was it a Blood Moon, it was a super Blood Moon, which is like “Blood Moon, Now With 14% More Blood!” Plus, a third take wouldn’t be coming until 2019 and that’s a long time to live down two consecutive misses. So, I rested all day, ate homemade rum cake to get a good sugar buzz goin’, and had the perfect viewing spot staked out weeks in advance: a secret panorama of five volcanoes and downtown Portland that put Mr. Moon right next to Mr. Hood. Behold, the reconnaissance pano shot (click on it):

Turns out, “secret” means “I know this place. Don’t tell anybody. Pass it on,” in photographer-speak. I counted four tripods and six really intimidating cameras before the night was out. (I did NOT count those holding up phones to the sky and bathing the rest of us in an obnoxious blue glow. Because morons.)

The punchline was that NONE of us got good rising moon pics. Portland was dry and windy all day. Wind means dust and dust means nature’s extra pixels all over your long distance money shot. You could barely make out the mountain, much less our closest celestial body.

Trust me, there’s a moon out there. 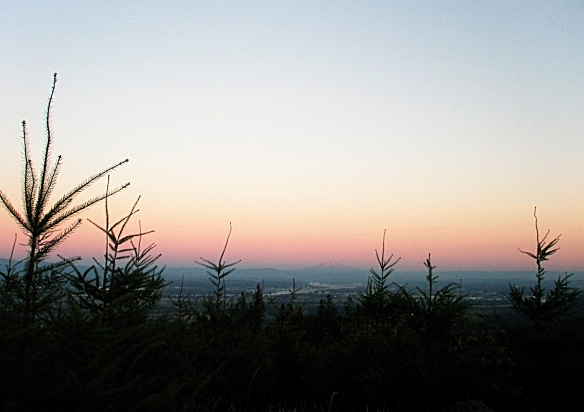 You see, with the eclipse already underway at moon rise, the object of our affection was too dim to punch through all that haze, so nobody had a clean view until the blackness of night provided a dark enough movie theater. We missed the first act and had to settle for the plot climax when the moon got good and bloody.

And by bloody I mean “the color of dried road rash scabs that have already started to chip away from your shins.” Nothing garish, and hardly the horror movie all the twenty-something camera phone operators were probably hopin’ for. Yet, still freaky enough to set off multiple religions, conspiracy theorists, and Fox News in a bullshit avalanche that buried common sense for months.

There’s no more hiding it, AT&T: Sauron is your true CEO.

Not being in possession of a camera priced more than a ski weekend in Aspen, I had zero luck finding enough contrast in the night sky for my puny sensors to get a fix on but I did meet a nice photographer named Joe who graciously allowed me to post some of his amazing shots. Let’s see if you can tell which ones are whose…. 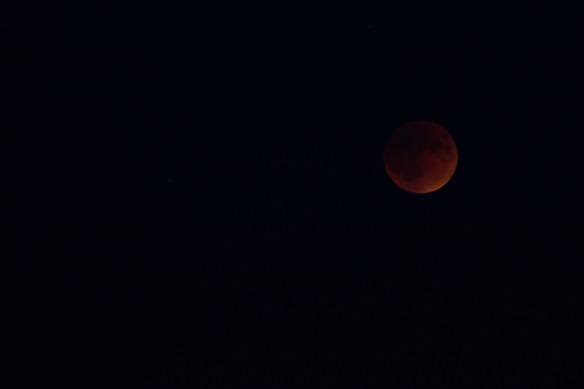 ***For those of you with severe hangovers or still adjusting your medication, that was mine, Joe’s, mine, Joe’s. Thanks, Joe.

About two seconds after the total lunar eclipse peaked, everyone under the age of 30 lost interest and began stumbling their way back to their vehicles in pitch blackness. All you could see were the erratic light trails of smartphones bobbing down the steep hill and occasionally a crazy arc and small scream when somebody fell. Even without these visual cues, though, you knew right where they were. The noxious waves of their cologne preceded them on the night wind like a bad omen.

I’ve heard the Blood Moon portends doom but death by Axe Body Spray was not what I had in mind. 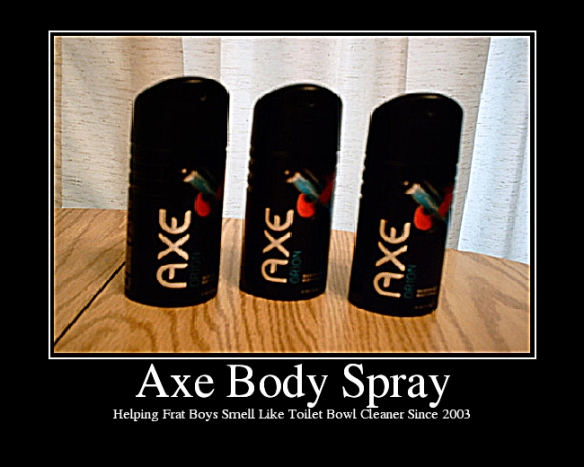 Driving home, I had the pleasure of watching the earth’s shadow pass to the right side of the moon, unveiling it in increments like the lunar phases on fast forward. Creepy to see a whole month unfold in 45 minutes. I’ll be 3 years older when the next Super Blood Moon comes around. Hopefully, the “and wiser” part will have kicked in by then and I’ll have settled down with a man with a huge…camera.

What are your thoughts? Cancel reply